Disclosure: We received tickets to the Hamilton musical to facilitate our review of the show. All opinions are 100% my own. See our disclosure policy for more details. 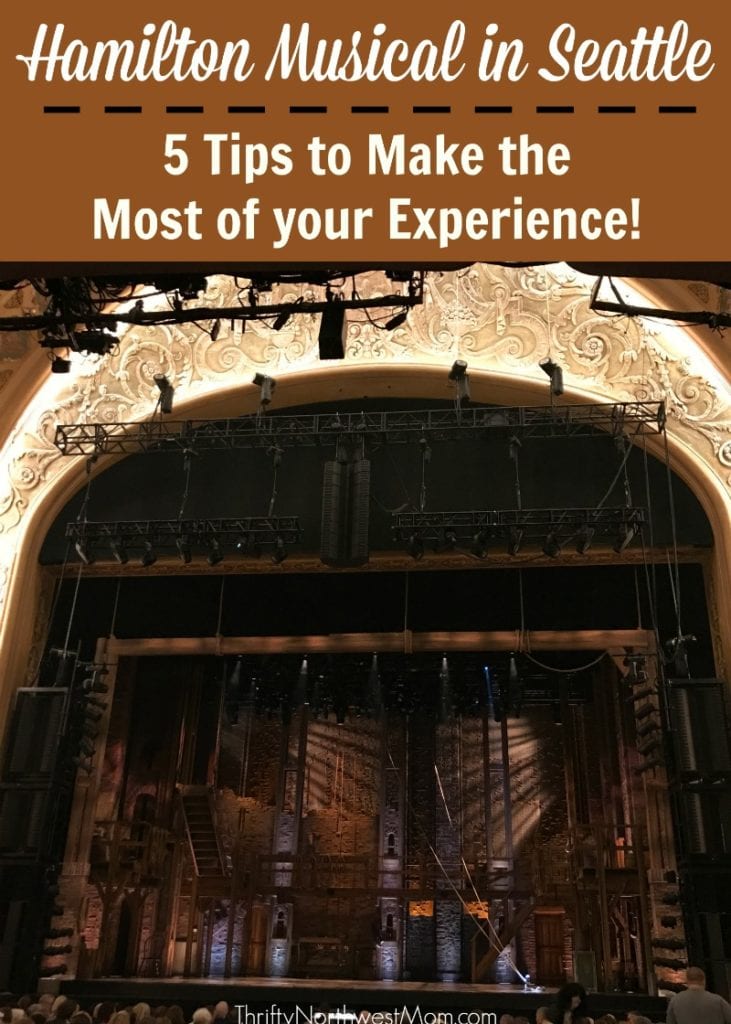 The hugely popular and critically acclaimed Broadway hit musical, “Hamilton – An American Musical”, is in Seattle right now for a 6 week tour at the Paramount Theater through March 18, 2018, as Seattle is the launch city for their second national tour. The Hamilton Musical debuted off-Broadway in 2015 & it remains one of the most popular musicals on Broadway even 3 years later.  This Broadway show won the 2016 Pulitzer Prize for Drama and received 11 Tony Awards, including Best Musical, Best Score and more.  The Hamilton soundtrack also received a 2016 Grammy for Best Musical Theater Album.

I had the opportunity to attend the Media night last week for Hamilton and let me tell you, it truly does live up to all the hype, popularity & accolades!  What I loved most about this musical is that it truly appeals to all audiences, which I wasn’t sure would be the case as many critically-acclaimed pieces may not always appeal to the broader masses. However, my husband and I felt this was truly  a musical that would span the generations in its appeal & likability for all audiences and such an entertaining way to learn more about the birth of our nation & lives of our Founding Fathers even for those who are not interested in history. It also is so appealing to a wide audience as the cast is all very ethnically diverse, which we loved to see. 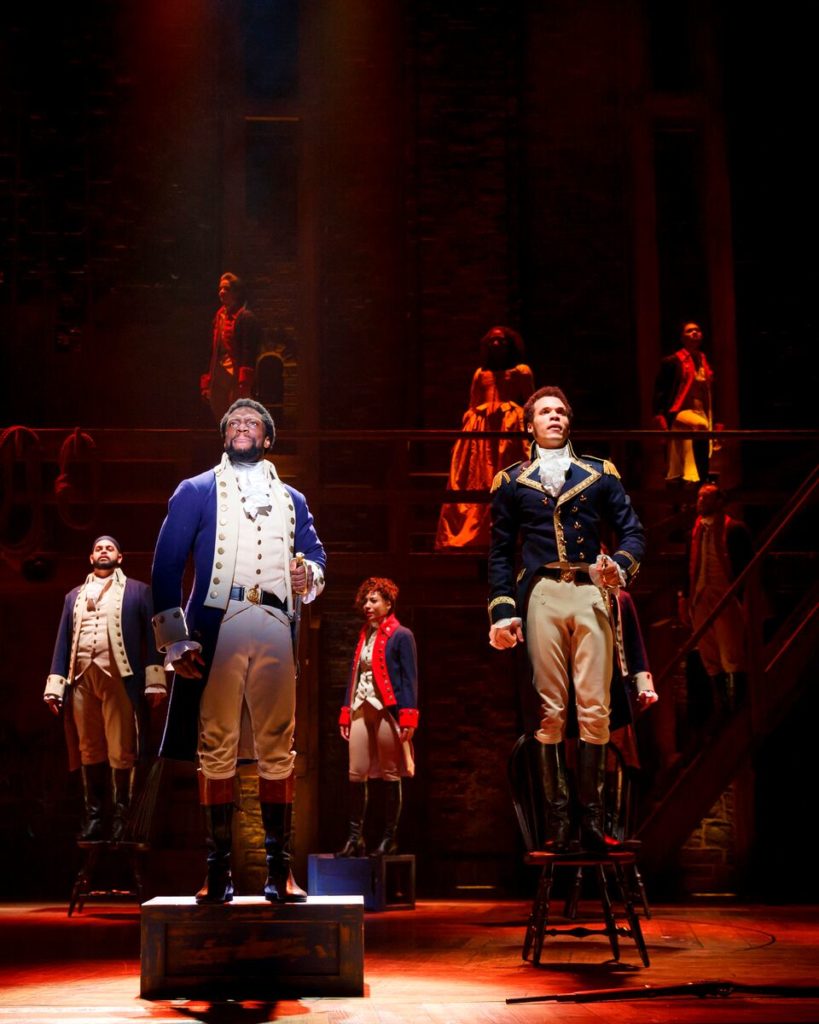 The appeal also lies in the span of musical genres, such as hip hop, pop, blues and jazz, and the tunes are so catchy that you just want to sing along. I loved that the audience in Seattle was so enthusiastic as they knew these songs so well & would break into loud cheers & applause as they’d start singing some of the most popular tunes from the musical {and made me realize we need to buy the Hamilton soundtrack ASAP so we can start listening to those tunes as well}.  Almost all of the show is told thru musical numbers, but that’s what makes it appeal to so many as you are learning history at the same time as you are listening to catchy songs. The dancing is outstanding too, to keep you entertained the whole show. 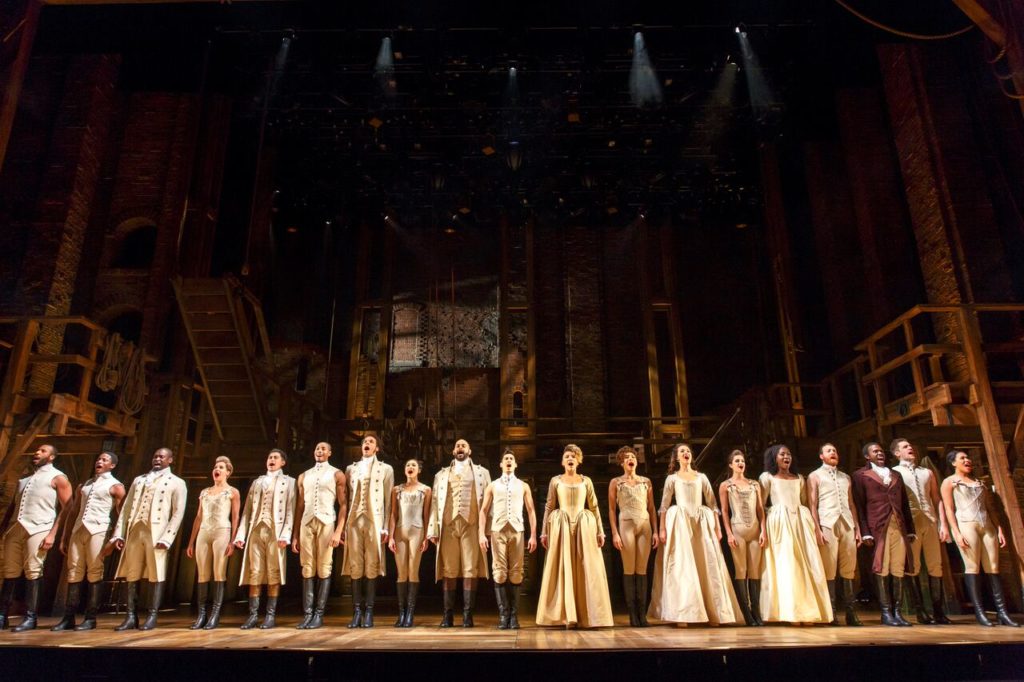 My husband is a high school teacher in an inner city school & after seeing this show, he remarked how impactful this would be for his teenagers to learn about American history in this entertaining way. With music and talk that is modern & relatable for the younger generations, it really makes history come alive and makes it more fascinating for kids to want to learn more about American History.

The Story of Hamilton: 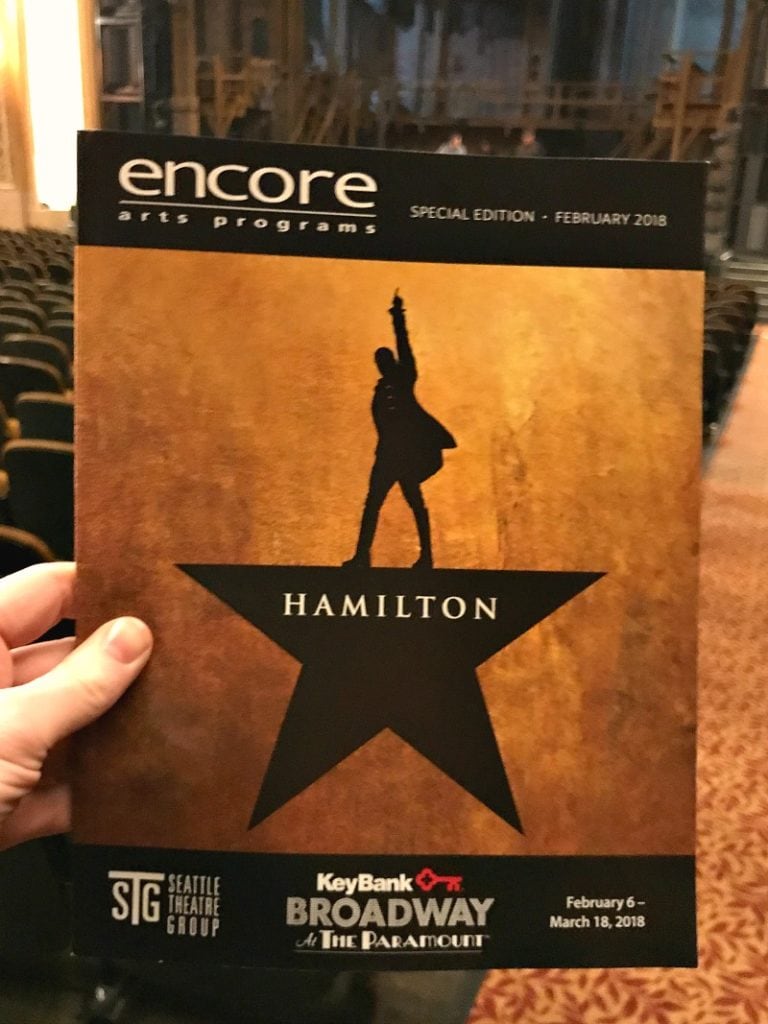 This is a historical musical based on Ron Chernow’s biography of Alexander Hamilton, one of America’s Founding Fathers and the US’s first Treasury Secretary on George Washington’s Cabinet. Hamilton was an orphan and immigrant from the West Indies and he became a key leader to George Washington during the Revolutionary War. The Hamilton musical dives into the challenges that he faced establishing the country’s first treasury and federal financial management, with opposition from some of the other founding fathers. The musical features a nice variety of comedic moments, romance, action, and suspense throughout the play.

5 Tips to Make the Most of your Experience: 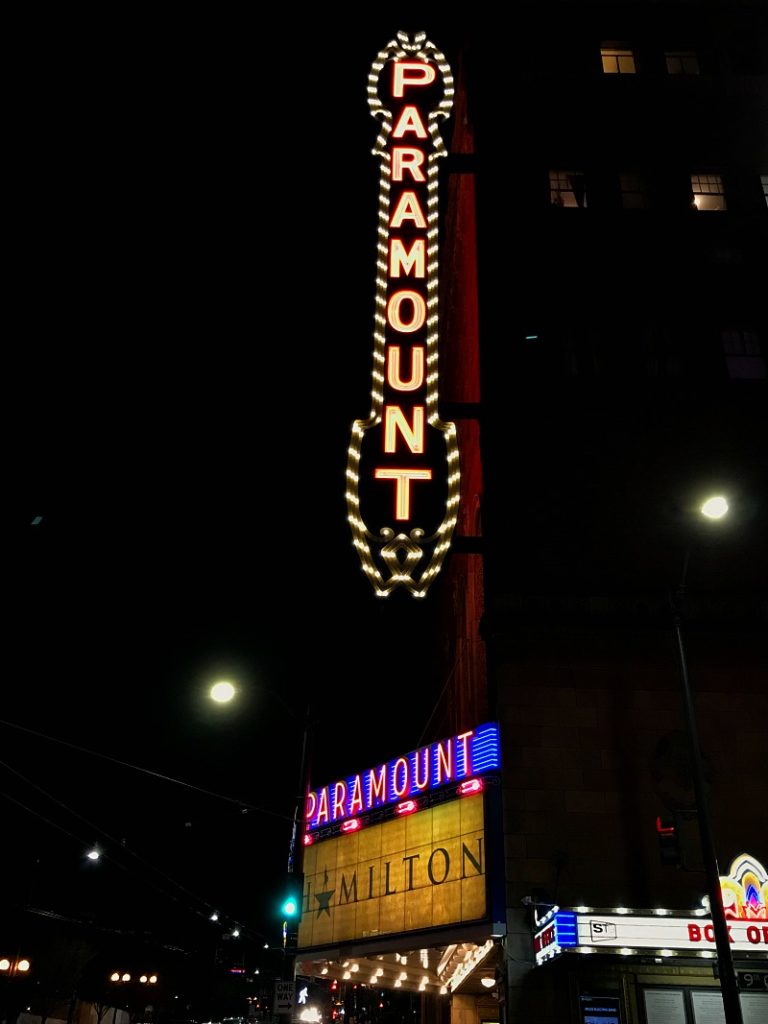 For those of you who do not go to downtown Seattle regularly, you may be wondering about the best options & pricing for parking. The parking right around the Paramount is typically around $20 – $25; however, if you park even just a few blocks away, you will pay significantly less for parking. We parked about 2 blocks away near the corner of 7th & Pine St & just paid $8 for the evening (we stayed away from the “event parking” as those were the pricey ones). I’m sure the further away you get from the theater during the evening hours, you could find a bit cheaper, too. 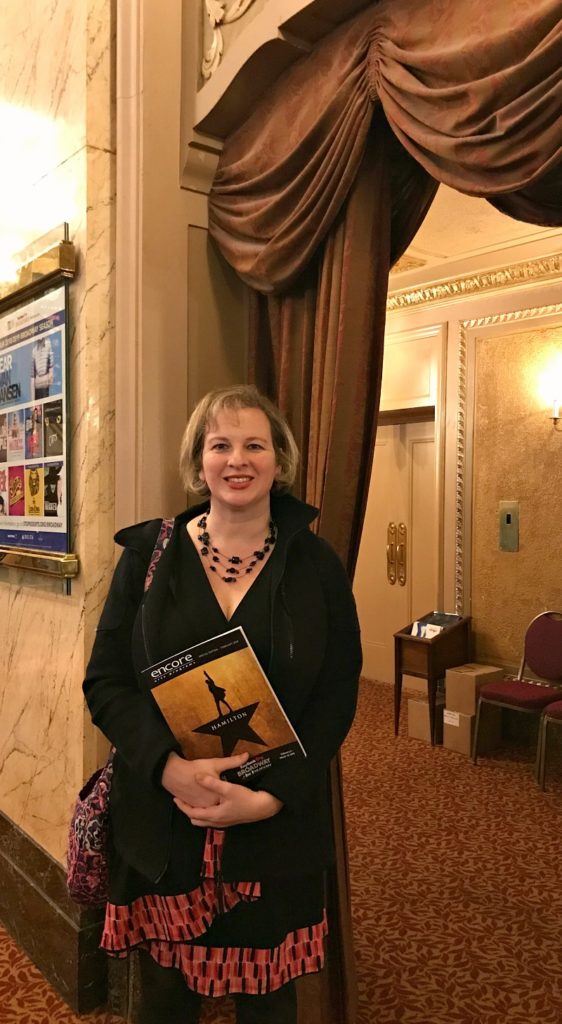 We went on Valentine’s evening, but even then we saw a variety of dress options for those attending. It really varied from women wearing a dress/skirt & men with suits & ties to those wearing jeans & sweaters. So, just go in what you feel most comfortable! We wanted a fun date evening so got a bit dressed up, but would have felt comfortable in nice jeans & a dressy top too.

Make it a fun date night or girls’ night out & spend the evening in Seattle with dinner beforehand or dessert after the show! There are so many fun restaurants nearby with Pacific Place, Westlake Center & tons of restaurants nearby. If you want a unique dinner option, The Carlile Room (Tom Douglas’ 13th Seattle restaurant) is offering a Hamilton-themed menu for a memorable evening, with dinner options (before or after the show, drinks & dessert). I like to check the Entertainment book app or coupon book to see if there are any options for restaurants nearby, too.

I highly recommend getting the soundtrack before you go see the show if you don’t own it already. I wish we had done this as it would have really gotten us into the spirit of watching Hamilton to have all those songs in our head when we went to see it! Loved being around such a fun audience in Seattle where there would be lots of cheers & clapping for the starts of their favorite songs! If you don’t purchase the soundtrack before the show, I guarantee you will want to purchase it after the show! The songs are just so catchy, you’ll want to sing right along! Plus, if you have Amazon Music – you can listen to it for free!

If you or your child is a true Hamilton fan, you may want to hang around a bit after the show as we noticed on the side street (9th Street) towards the back of the theater behind the big Hamilton semi-truck, several of the Hamilton actors did come out to greet fans & sign some autographs. Great opportunity for Hamilton fanatics to meet these fantastic actors. :)

If you were not able to get Hamilton tickets ahead of time, there are still limited seats available for each showing; however those seats may be quite pricey. But keep checking up to the day of the show for any more seats released.

They are also offering forty $10 Hamilton tickets for each show at the Paramount Theater – this is lottery-based, so you will need to register for the lottery and try for the tickets 2 days before each performance. We’ve been hearing from several Thrifty NW Mom readers who have gotten these $10 tickets, so if you don’t get it the first time, keep trying each day you can go!

Let us know what you think of the Hamilton show if you’ve been!

With book, music and lyrics by Lin-Manuel Miranda, directed by Thomas Kail, choreography by Andy Blankenbuehler and musical direction and orchestrations by Alex Lacamoire, Hamilton is based on Ron Chernow’s biography of Founding Father Alexander Hamilton. A thoroughly inventive, wildly entertaining musical about the birth of our nation – with a score that blends hip-hop, pop, blues, jazz and Broadway – Hamilton opened on Broadway in 2015 to enthusiastic reception from critics and audiences of all ages.

HAMILTON is the story of America’s Founding Father Alexander Hamilton, an immigrant from the West Indies who became George Washington’s right-hand man during the Revolutionary War and was the new nation’s first Treasury Secretary.  Featuring a score that blends hip-hop, jazz, blues, rap, R&B, and Broadway, HAMILTON is the story of America then, as told by America now.

With book, music and lyrics by Lin-Manuel Miranda, direction by Thomas Kail, choreography by Andy Blankenbuehler and musical supervision and orchestrations by Alex Lacamoire, HAMILTON is based on Ron Chernow’s biography of Founding Father Alexander Hamilton.