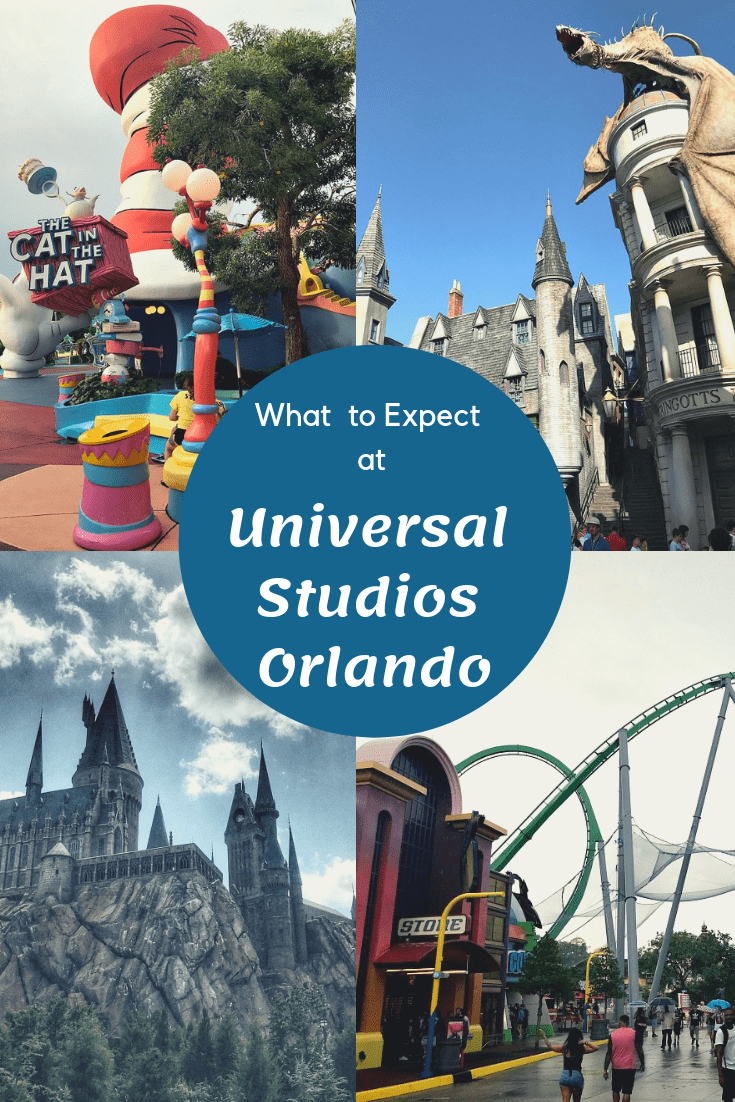 Planning a trip to Florida, and want to know what to expect from Universal Studios Orlando? We have the scoop here to help you plan your getaway. Plus, we keep an updated list of all the best discounts and deals for Universal Studios tickets here, so be sure to check that out too!

Have you ever experienced the Universal Orlando Resort? With three separate theme parks, it is the ultimate vacation destination. And with discount tickets from Get Away Today, you can plan to stay and play for longer! We visited last year for a day & had a blast. My family now wants to head back again and spend a few days there with all there is to see & do at the theme park, water park & City Walk.

For travel to Universal Orlando now until December 20, 2019* you can enjoy huge ticket savings from Get Away Today. They are currently offering a couple of “get 3 days free” promotions too! This will ensure you have plenty of time to explore Universal Studios Florida, Universal’s Islands of Adventure and Universal’s Volcano Bay. (*excluding July 2019)

Feel like part of your favorite movies and shows when you step into Universal Studios Florida. From Harry Potter to Minions and more, there’s something for everyone. 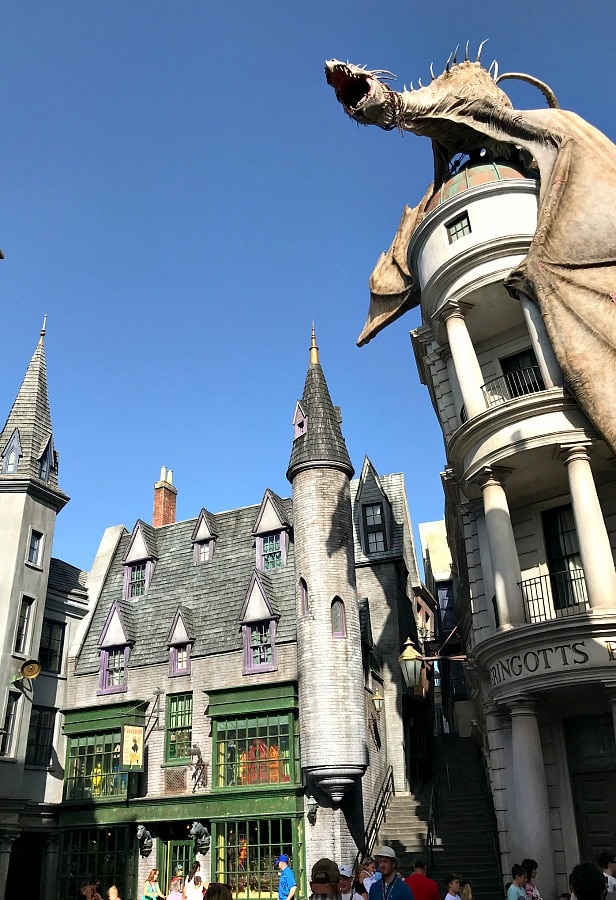 For Potter fans young and old, The Wizarding World of Harry Potter – Diagon Alley awaits in Universal Studios Florida. Ride Harry Potter and the Escape from Gringotts or grab a bite to eat in The Leaky Cauldron.  See a wand choose a wizard or choose a wand yourself at Ollivander’s Wand Shop. 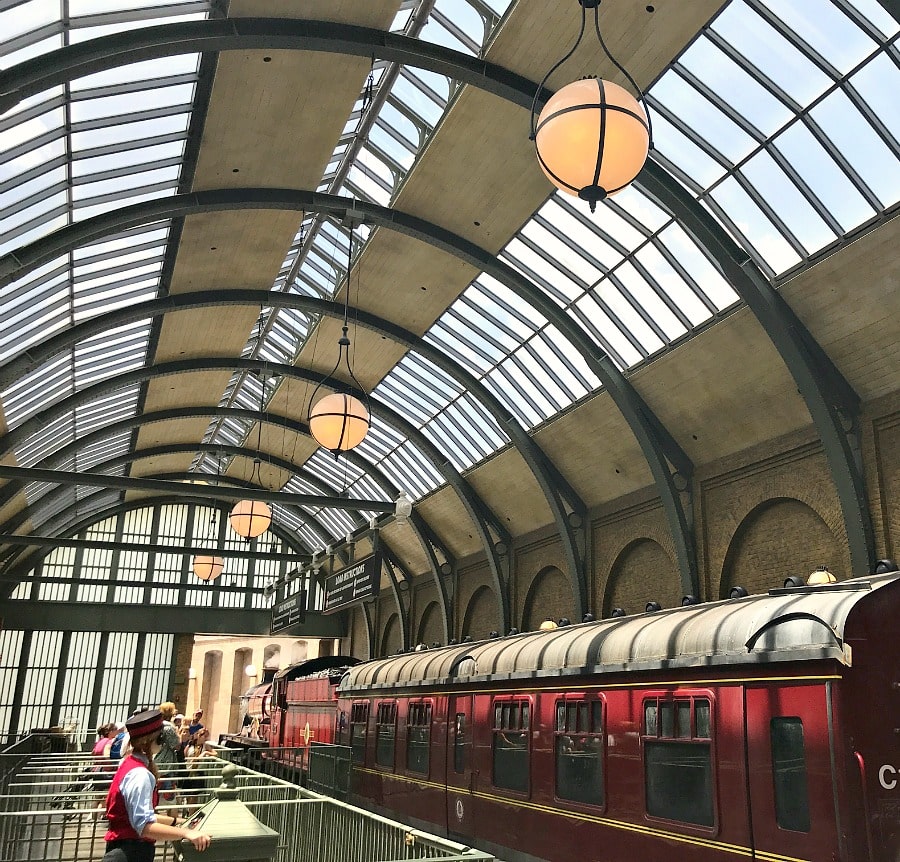 Younger guests at Universal Studios Florida will want to check out Despicable Me: Minion Mayhem, Transformers: The Ride-3D and A Day at the Park with Barney. The oldest attraction at Universal Studios is E.T. Adventure, during which you board a flying bike for a virtual ride experience that serves up a blast from the past based on the iconic film, which guests of all ages will love.

Other attractions in Universal Studios Florida include MEN IN BLACK: Alien Attack (so fun with the new movie coming out soon!), Fear Factor Live, The Simpsons and Fast & Furious – Supercharged.

While all three theme parks at Universal Orlando are fantastic, Islands of Adventure is actually voted the number one theme park in the world on TripAdvisor. With a great lineup of rides, attractions and more it’s easy to see why! 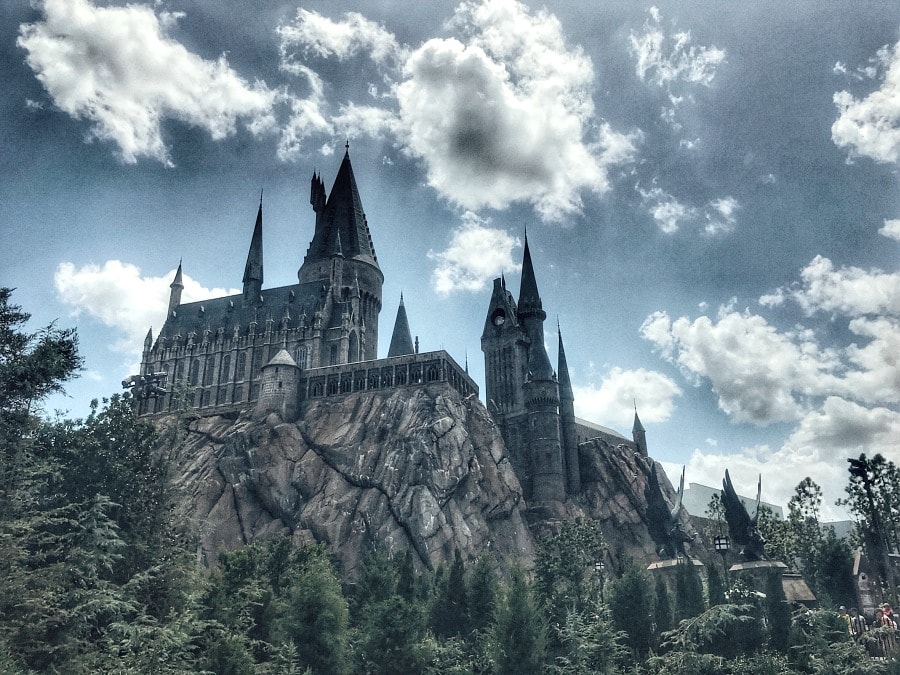 In Islands of Adventure, you can experience more from The Wizarding World of Harry Potter, including Hogsmeade, Harry Potter and the Forbidden Journey, Honeydukes and another platform for the Hogwarts Express.

Remember that Hogwarts Express requires a Park-to-Park ticket to ride, as it takes you between two of the three parks in the Resort. 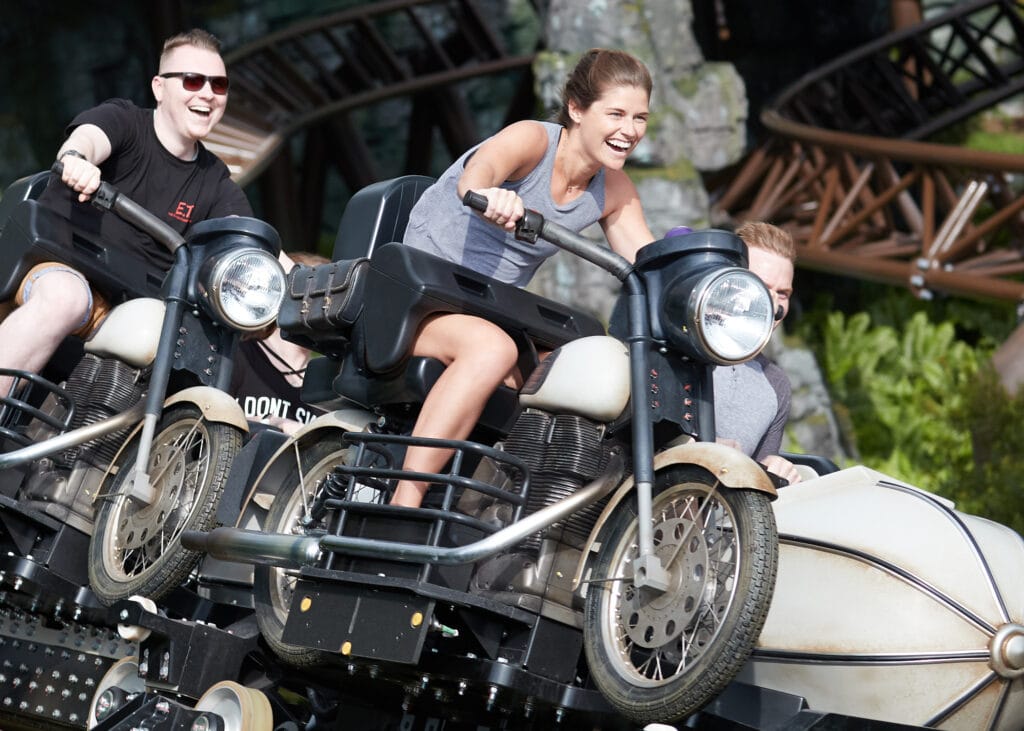 This is the brand-new roller coaster, Hagrid’s Magical Creatures Motorbike Adventure. This thrilling ride is family-friendly, but will delight with high speeds and glimpses of a variety of magical creatures from the world of Harry Potter. 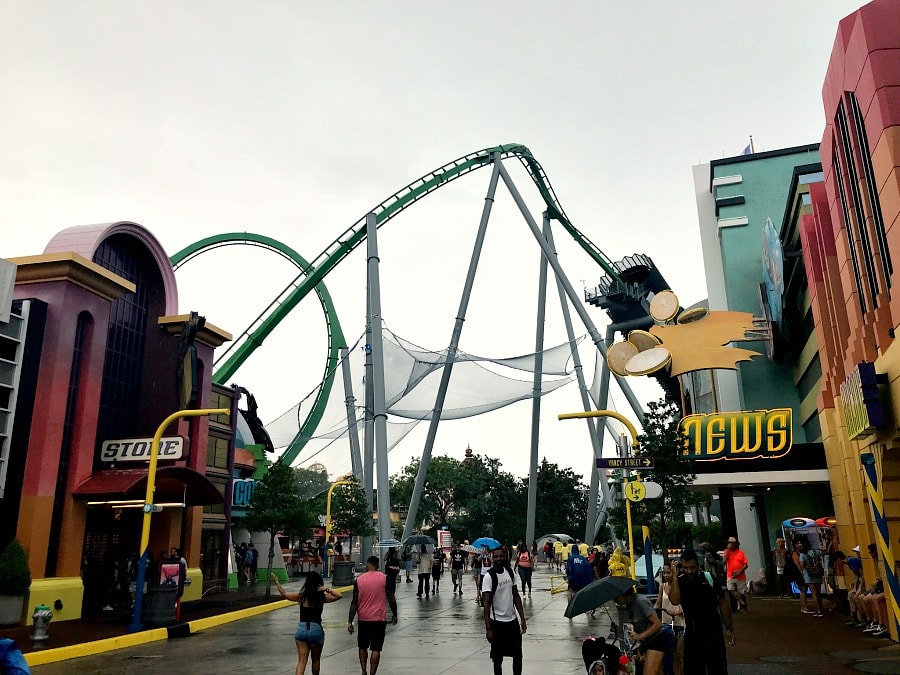 For more thrills, check out the various Jurassic Park attractions or Poseidon’s Fury live show. And for all fans of super heroes, there’s Marvel Super Hero Island. This section of Islands of Adventure features The Incredible Hulk Coaster, Doctor Doom’s Fearfall, The Amazing Adventures of Spider-Man and more. You can also take photos with heroes from Captain America to Wolverine. 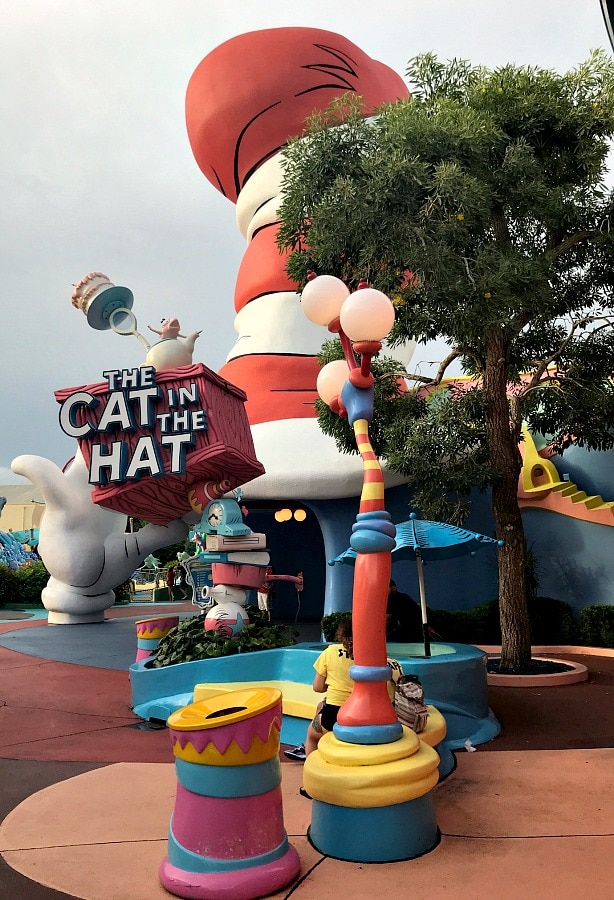 Younger travelers will enjoy Seuss Landing with rides modeled after this beloved author’s stories. The entire land is dedicated to the details Dr. Suess dreamed up, with nary a straight line in sight! 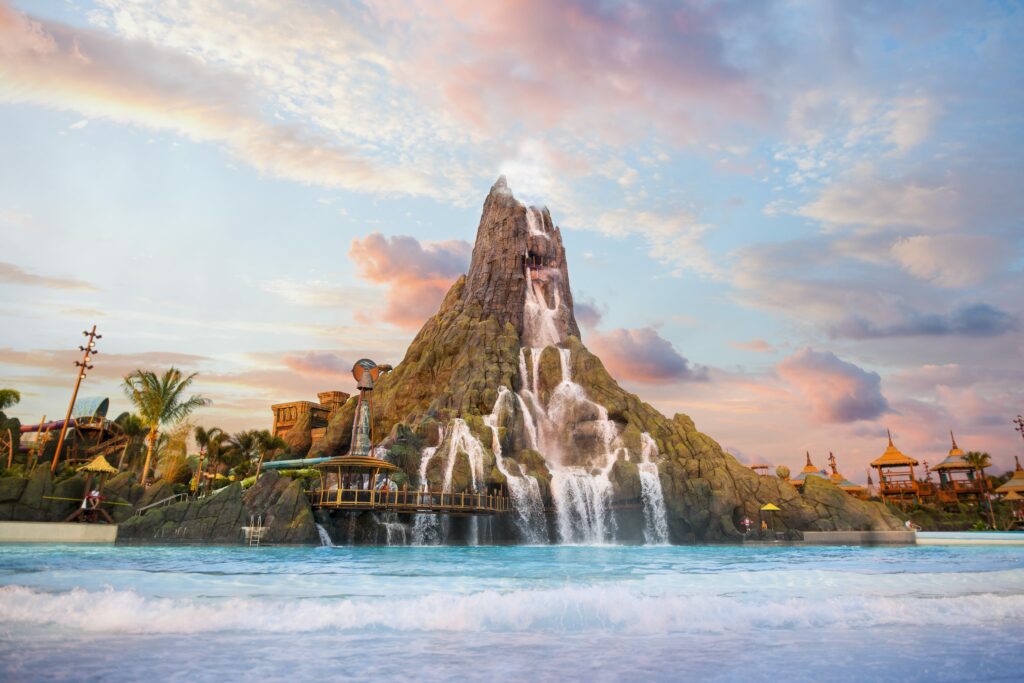 As you probably guessed from its name, Volcano Bay is built around Universal’s very own volcano. This water park features thrills and relaxation for all ages. The 200-foot volcano houses a number of waterslides, and glows with lava effects each night. The Krakatau Aqua Coaster sends four guests on a canoe through the volcano, taking them through the twists and turns inside before emerging through a waterfall into a pool. Three “Villages” form Volcano Bay with various water attractions. Take the lazy river to avoid walking on the hot pavement, hop on a waterslide or enjoy a splash pad area that caters to
younger guests.

Rent cabanas, enjoy poolside snacks and avoid wait times by checking in at your ride of choice with the wearable TapuTapu band. Upon entering Volcano Bay, each guest receives a TapuTapu band to wear; it can be scanned at rides to check in and hold your place,  and can be used to pay electronically for food in the water park. TapuTapu bands are returned when you exit Volcano Bay. 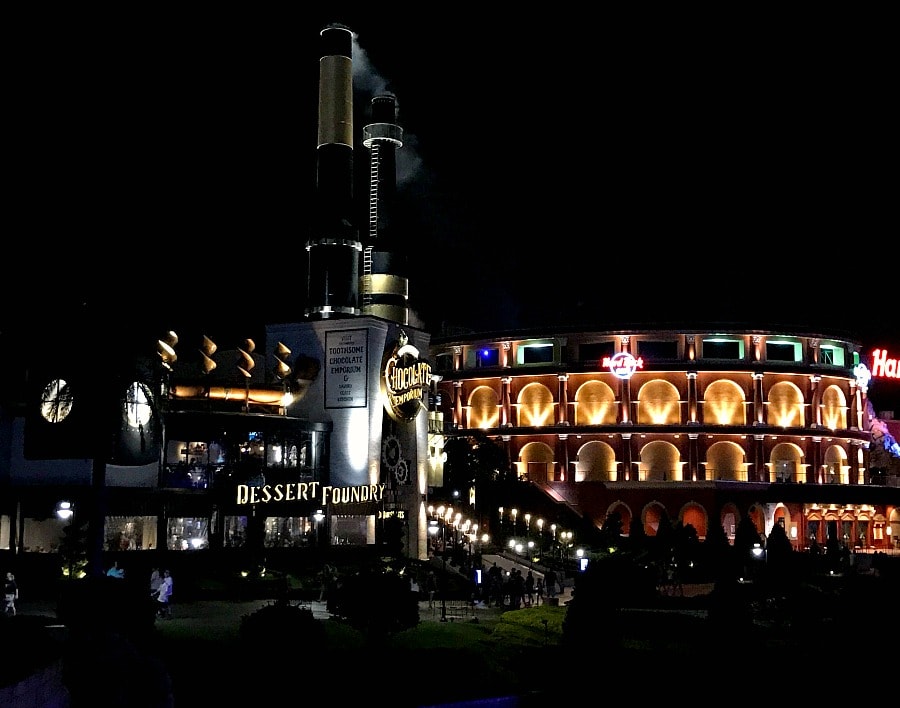 Universal CityWalk is your one-stop shop for dining, entertainment and shopping at Universal Orlando. Located outside the three different theme parks, it is easily accessible to all. Some of the restaurants and eateries in Universal CityWalk include Voodoo Doughnuts, Antojitos, Hard Rock Cafe & Margaritaville. We enjoyed dinner at Margaritaville, complete with restaurant-wide sing-alongs to Jimmy Buffet songs. Head to the Toothsome Chocolate Emporium after dinner for amazing milkshakes complete with a dessert topper!

Theme park admission is not required to access Universal CityWalk, but some of the entertainment options may require a separate purchase. You can find entertainment such as Blue Man Group, Bob Marley – A Tribute to Freedom, Hard Rock Live Orlando and so much more. 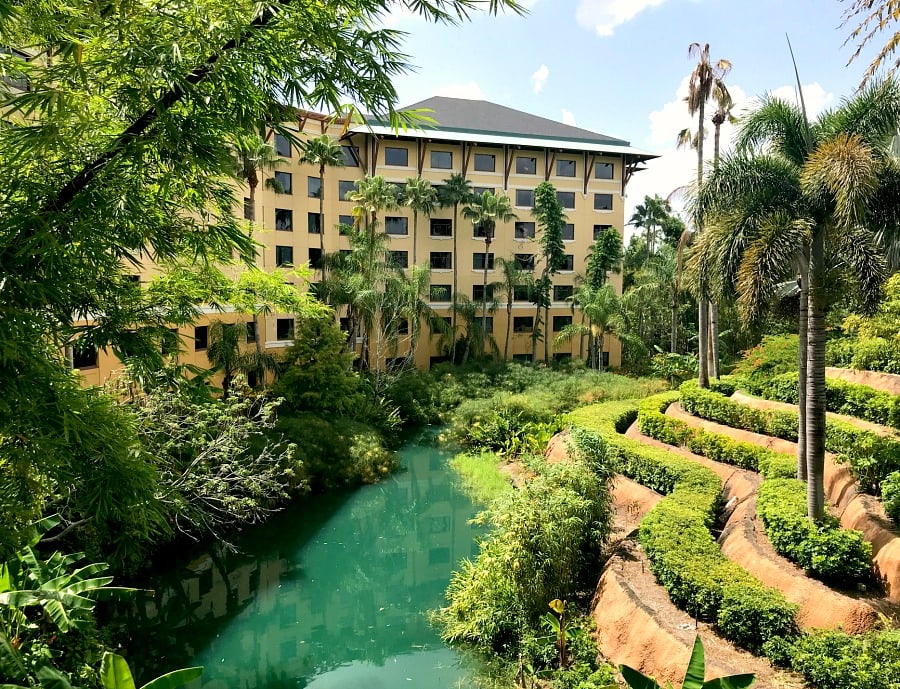 If you’re headed to Universal Studios in Orlando and want to stay near the resort, there are several on-property locations that offer some great amenities, as well as big perks to staying on property.  We stayed at the Loews Royal Pacific Resort and it was a beautiful resort. It’s very family -friendly and has some great pool areas that kids will love.

One bonus perk to this resort is that we had the opportunity to meet & interact with characters during check-in, which we weren’t expecting & was such a nice surprise as we entered the lobby to check in late afternoon.

Perks to Staying on Site at Universal Studios Hotels: 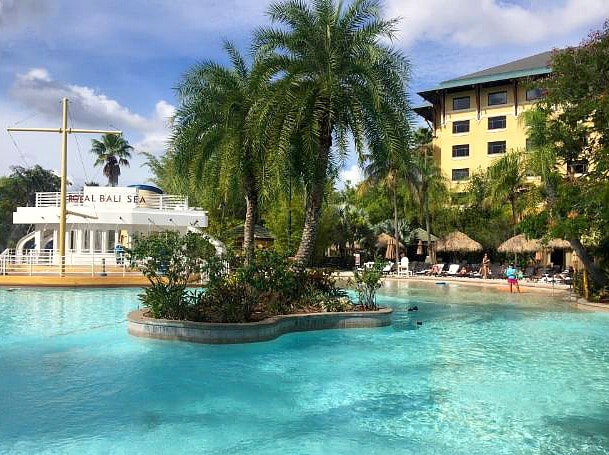 Skip the Regular Lines with the Universal Studios Express Unlimited Pass (this pass is free with select Universal hotels such as the Loews Royal Pacific Resort) – this was the number one reason that we stayed at the Universal Studios Royal Pacific hotel. It is savings of $129/person/day if you were to purchase this for each person in your group each day. For our family, that was a savings of $516 for 4 Express Passes (minus the cost of the Royal Pacific hotel one night – prices start at $228/nt), which was still a big savings for us as compared to the price of the Express Passes for each of us.

We went to Universal Studios for one day with family & it was one of the hottest days of the year in Orlando (over 100 degrees with heat & humidity). With the amount of rides we wanted to do, as well as see all of the Harry Potter sites & shops, there’s no way we could have done all of that without the Express Pass. The Express Pass saved us so much time as the Express lines were much shorter than Disney’s Fast Pass lines & you can literally use the pass on almost everything, with no limits to how many times you used it or time constraints, it was unlimited. With the heat & high humidity & being from the West Coast, we were so thankful to not have to wait in long lines, but go straight to the air conditioned rides.

Early Theme Park Admission – you can visit the Wizarding World of Harry Potter and Universal’s Volcano Bay water park one hour before the rest of the theme park opens (with paid theme park admission).

Free Transportation to the Theme Parks and City Walk – you can ride the water taxi or a shuttle bus to City Walk & the theme parks. We were so thankful to ride the water taxi at the end of the night when we were exhausted. We caught the boat in the City Walk area, right outside of the theme parks & it took us all the way to our hotel.  So relaxing & saved us a long walk at the end of the night.

Close proximity to the parks & City Walk – we arrived the night before & went to a family dinner at City Walk & we could either walk along a nice pathway along the water or take the boat to City Walk. It is so convenient to have access to all the restaurants & shops so close to your hotel & it made it really nice in the morning too when we arrived for our extra hour early to the Harry Potter area.

Get Away Today also partners with a number of hotels in the Universal Orlando vicinity, offering suite-style rooms for convenience. Two of the newest contracts include:

Lake Buena Vista Resort Village and Spa – This spot is perfect for families (especially larger families) as they offer muli-room suites with kitchens and pirate themed pool for fun, and much more!

StaySKY Suites I-Drive Orlando – this one is a great option for those of you looking for space for the family to spread out, but also want something more budget friendly. This one comes with  free daily breakfast, free parking and complimentary scheduled transportation to theme parks within the area, which are added perks that will also save you more money!

These properties offer exclusive perks to Get Away Today guests, including complimentary breakfast and transportation to Universal Orlando Resort. You can check out Universal Orlando Resort vacation packages at Get Away Today or call and agent at 855-GET-AWAY with any questions you have. Be sure to let them know Thrifty NW Mom sent you so you can get an extra $10 off your vacation package bookings!

If you are in the Universal Studios Orlando Resort area, you also might want to check out the worlds biggest McDonalds. It was on my kids bucket list, and they loved stopping by here for some arcade fun, and food one day! We share more information from our visit here.

If you have decided this is something you want to check out, don’t forget to find the best discounts and deals for Universal Studios tickets here.

You can also find more deals and planning information for Walt Disney World, if you are planning to visit there as well here. 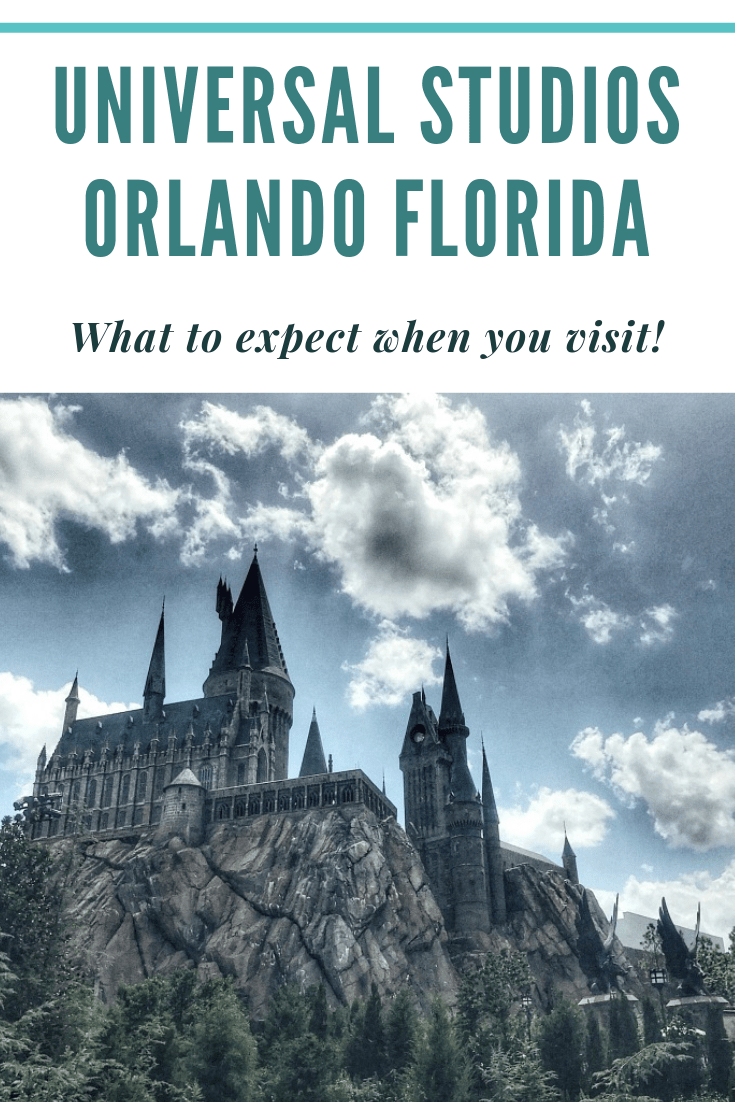 Disneyland Transportation – How To Get Around 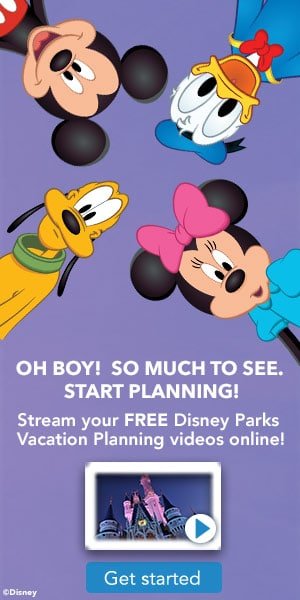