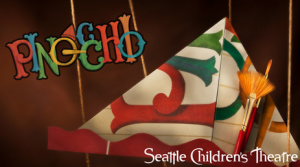 Goldstar is offering a huge discount on tickets to see Pinocchio at the Seattle Children’s Theater! The Children’s Theater is hosting a new take on Pinocchio. There are quite a few dates to select from starting at the beginning of March. Ticket pricing varies depending on the date. Goldstar is offering Pinocchio tickets from $12.50 – $18.00 (plus a $4-$5 service fee, but you generally have to pay those wherever you purchase your tickets), and are regularly priced at $25.00 – $36.00. This would be a great family outing!

There is an additional booking fee that is not included in the above price, which is around $4 or $5.

This fast-paced and funny new take on Pinocchio finds plenty of contemporary comedy and adventure in the coming-of-age quest of the mischievous wooden puppet who longs to cut the strings and explore the world. But after he’s tricked into giving up his possessions, it’s up to a certain famed cricket and fairy to help him learn to tell the truth and to appreciate the love of his dear old dad. Recommended for kids age 6 or older, this clever reimagining borrows elements ranging from Italy’s commedia dell’arte and England’s Punch and Judy to American vaudeville.